I was cutting a wheel of cheese one day… yes, I get to “cut the cheese” in a literal way… make the same juvenile joke everyone makes… haha. Anyway, I was cutting the cheese and my boss and I were talking about our department at Whole Foods. It’s a really fun department. He and I were talking about my past work experience and how much it aligns with the “Specialty” department. I’ve got four years as a barista under my belt… and we oversee the coffee. I was a Wine salesperson… and we oversee the wine. I used to brew beer with my friends… and we oversee the beer. Basically, I was rounding out my knowledge of our department as I learned how to break down a wheel of Parmigiano Reggiano as well as the difference between a brie and a washed rind cheese.

I looked at my boss and told him, “This department kinda feels hand-in-glove.” 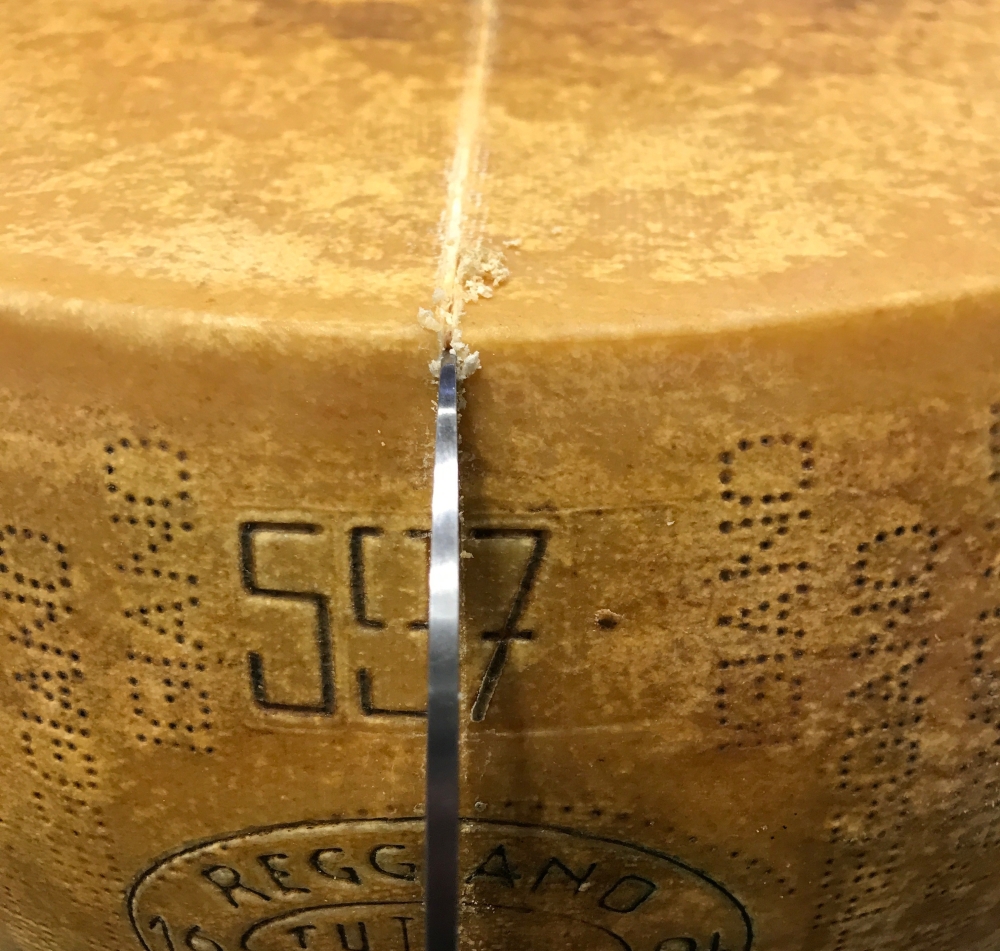 Scoring a wheel of Parmigiano Reggiano

Don’t get me wrong, I was definitely in my wheelhouse when I worked in the Bakery. I was in my element at the Coffee Bar and making sandwiches with Prepared Foods. However, there is something I really fucking love about Specialty. I love walking a customer through the Sauvignon Blancs in our wine set and explaining the difference in terroir you get by planting the same grapes in New Zealand and California. I enjoy giving a customer a piece of Vermont Cheddar that was started with a Parmesan cheese culture and watching their brains try to comprehend all the unusual flavors. I love pulling medium and dark roast coffee beans out of the Bulk Coffee Bins and explaining why the dark roast is so shiny.

It’s a great department and a great job.

And I was never supposed to be here enjoying it.

I then transferred with Whole Foods to a store in Dallas. I was going to stay with them until I found something better in DFW. I was runner-up for quite a few jobs. The companies that found my blog (I could track it in my analytics) would pass on me when they discovered I was transgender. They couldn’t legally admit it and I wasn’t going to press them on it but I would go from “barring something unseen we’re going to have you go through to the next round” to “we’ve decided to go in a different direction” within a couple of hours of them finding my blog. Only American Airlines and a smaller tech company were willing to judge me on my merit. I just wasn’t a fit for their jobs. Nothing better came along in DFW.

[Aside: I’ve refused to take down my blog because I have friends that have gotten sober as they’ve learned about my time drowning in booze at the end of my marriage. I have Evangelical friends that have come out to me as LGBTQ and feel less alone in the world because they have read about my struggles with Gender Identity. I have friends with mental illnesses that have gotten the help they needed because they read my blog. My transparency with you as a reader has helped people stay alive, sober, and sane. As a result, I leave up my story, even though it’s probably cost me better paying jobs.]

In early 2018 I decided that I was going to give up my job search and jump into making bagels full-time. I started developing some kick ass recipes, bought a domain name, and had the logo drawn up. I was researching how to get into local Farmer’s Markets when I had that rug swept out from beneath me. I was sued for Child Support. Suddenly the 1099 gig I had picked up cooking for a local coffee shop became negative income. Between ingredient costs, taxes, and child support, I owed 110% of what I was making. I just let the domain name expire and archived the logo. Starting my own business was a non-starter. 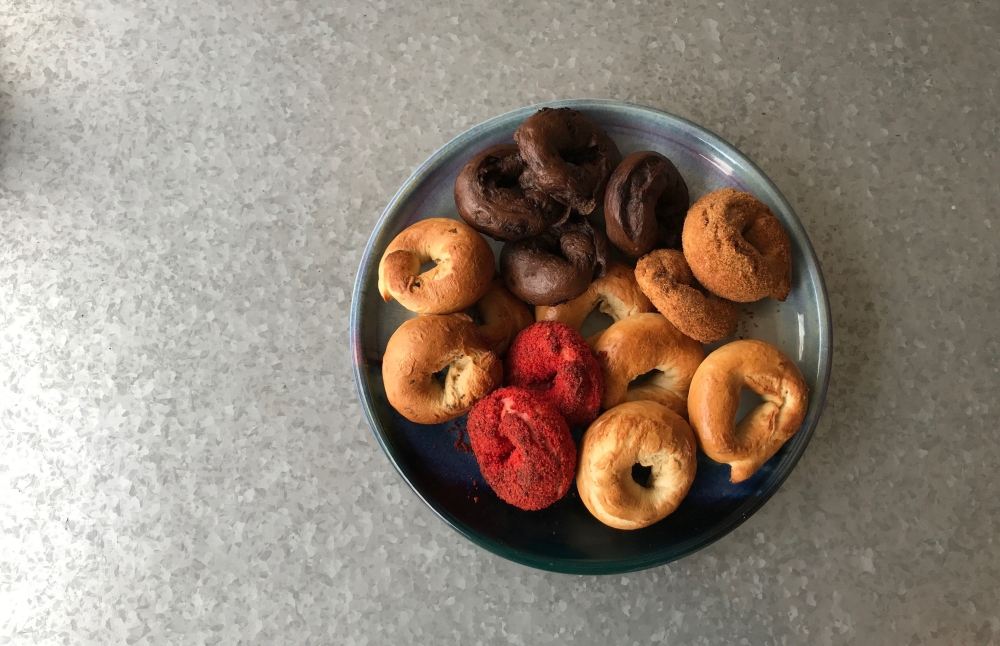 Around the same time that I had just given up and decided that I didn’t have any hope of a financial future, my boss in Specialty asked me to apply for a Full Time opening we had. Within a month of being hired, the people around me realized that I was capable of more than I was doing. As I talked with my immediate boss and his boss, they both told me that they thought I had a bright future in the company. I heard that from more and more people as I interacted with them.

None of them gave a fuck that I was transgender. As a matter of fact, most of them took an active approach in accepting me and asked what pronouns I prefer. I work with three transwomen, one nonbinary person, and one transman that are in various stages of transition and gender exploration… and that’s just in my current store. About half of my Specialty team is “family,” as we call ourselves. We’re mostly one big Queer group, and we even make room for the hetero/cis people on our team 😉

I recently decided that it was time to remove the “until” from my job with Whole Foods. I’m not only tolerated but accepted within the corporate culture of my company. Actually, Whole Foods goes even further and protects me… we have protections for Transgender employees written into our corporate laws. Also, I’m judged on the content of my character, not the color of my skin, who I love, or whether or not I wear mascara.

Over the last year, I’ve watched my peers apply for various jobs and I learned a couple of things. The first is that people who change stores are favored over people who stick with one store. The second thing I’ve learned is that changing teams is a pro and not a con. Lastly, I’ve learned that vertical moves can only happen one at a time once you’re in the system.

As a result of learning these things, I started looking for jobs as a “Specialist” a few months ago… that’s our fancy word for a buyer. I was just hired as a Wine Specialist in one of the highest performing stores in the region. It’s going to suck leaving my current store and current team. It’s also going to be strange being a Wine Specialist that doesn’t drink.

Even with the raise that comes with the position, I still won’t make even close to what it takes to live. I start each month in the hole, owing about 40% of my pre-tax income. I don’t actually make money for myself until sometime around the 12th of the month. I had to quit therapy and wean myself off of my antidepressants. Money to do things like get laser hair removal and get on hormones is so far away from attainable that I try not to think about it… it sends me into a tailspin of despair.

I try to focus on the good instead of the bad. I have kids who love me. I have a girlfriend that is amazing. I work for a company that celebrates who I am and I even have a promising future with them.

It’s funny how something that started as temporary turned into something permanent.

2 thoughts on “Turned Into Something”